It has been pointed out that “waste is only really waste if you waste it.” That is of particular concern when what is being wasted is potential renewable energy. Our food system generates two major waste streams that have traditionally ended up on the negative side of their potential – the manure that comes from farm animals, and the inedible food waste that happens at the food manufacturing or retail level. There is a solution that addresses both of these missed opportunities and reduces our reliance on landfills and incinerators. A company called Vanguard Renewables has developed a business model that connects farms with food companies and retailers to combine their waste streams and use them to generates renewable natural gas which can then serve to decarbonize the energy supply for society as a whole.

This solution hinges on a technology called “anaerobic digestion” or AD that has been used extensively for decades in Europe. An organic waste source like manure is put within a closed tank without oxygen. Under that “anaerobic” condition there are specialized microbes from the gut of the cow that can digest the organic matter. Unlike most living things that generate carbon dioxide as they metabolize their food, these “anaerobic” specialists generate methane gas – the same energy-rich fuel we call natural gas. The difference between the gas from one of these digesters and the fossil fuel version is that the carbon in the gas from a digester was created biologically, and not by fossil extraction. That means that when the methane is burned to produce energy, the carbon dioxide that is emitted is “carbon negative” and isn’t a net contributor to the total amount of CO2 in the atmosphere. Then, if the methane from a digester (also called “green natural gas”) is piped into the existing natural gas utility stream, it has the same sort of “decarbonization” effect that is achieved by putting electricity generated by solar, wind or nuclear into the overall electricity grid.

Vanguard Renewables was started in 2014 by solar energy investor and entrepreneur John Hanselman who had been a skeptic about AD until he saw how widely it was being used in Europe. At that time anaerobic digestion was being used to some extent in the US dairy industry, but there was much more untapped potential. The limiting factors for AD implementation are the significant capital cost to build a facility and the need for considerable expertise to operate the system. Large diary operations are a logical place to build digesters because they generate a continuous stream of manure – often more than can be reasonably spread back on the surrounding fields. Also, if the manure has to be stored in a lagoon for later use it creates methane and an odor issue for any neighbors, and the ammonia that volatilizes from stored manure causes other environmental problems. A digester can be run on a continuous basis so that the need to store the manure is virtually eliminated. 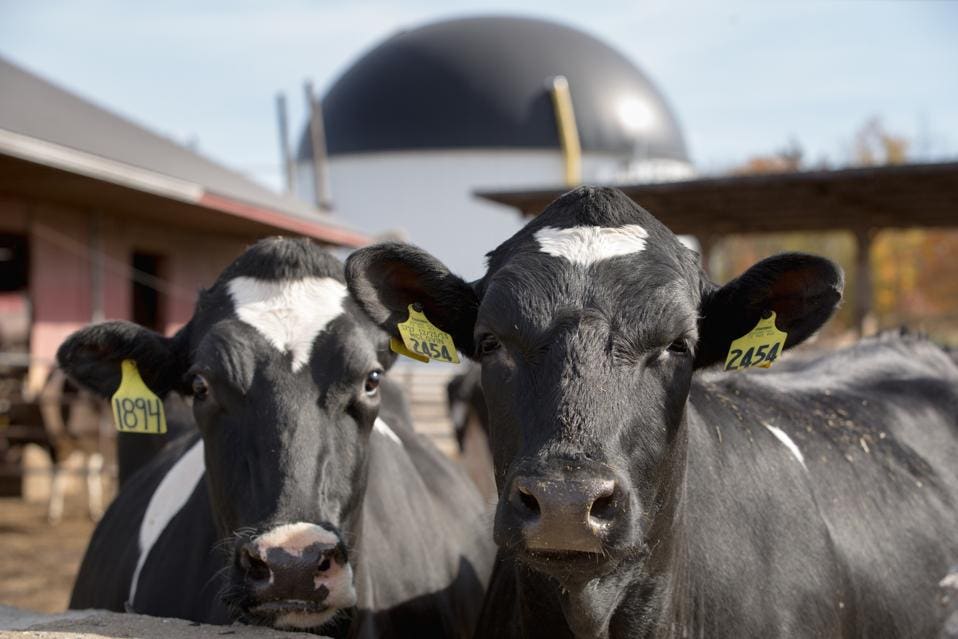 Vanguard makes lease arrangements with the dairies for the land where it builds digester facilities. They then take the manure and after they have generated the methane, the farmer gets back “digestate” that as been fortified with all the food nutrients at no charge. Thee solid part of what they get makes excellent bedding for the cows and the rest makes a soil-injectable fertilizer that avoids the odor and massive volume issues of raw manure or even composted manure. The farmer doesn’t need to purchase nearly as much synthetic fertilizer and so a life cycle analysis of the milk reflects a smaller carbon footprint ( in an almost ironic way that savings is because less fossil natural gas is needed to make nitrogen fertilizer for that farmer’s forage crops). Vanguard dries and purifies the methane and feeds that into the regional natural gas network and gets their income from the utility company. The dairy farmer has no upfront capital cost, does not have to play any role in operating the plant except collecting and delivering the manure, gets a monthly lease income and then the digestate fertilizer and bedding. This farm side of Vanguard’s business it described as “Farm Powered.”

The other part of the business model is that Vanguard makes agreements with companies that have food waste issues such as processing side streams at a food manufacturer or brewery, or inedible food waste that is generated at grocery retail based on items that have gone past the date at which they can be sold or donated to a food bank. Vanguard has organic waste recycling facilities built specifically to accept and process this waste including even packaged foods that have to be opened to get to the organic waste.

This organic waste is then sent to the farm where it enters a hydrolyzer and is heated to 104 degrees for five days before entering the anaerobic digester to be combined with dairy cow manure. This addition can actually lead to even better performance of the anaerobic digestion process. The farmer gets even more digestate. Some municipal waste haulers also arrange to bring their excess organic waste to the farm sites.

Over the past several years Vanguard has been refining their system and so they recently pursued a round of funding for expansion. They had several offers and took the one from BlackRock Real Assets, an ESG-focused finance company.

It takes a reasonably large dairy in terms of the number of cows to justify a digester installation, but in areas with smaller dairies Vanguard has set up arrangements where the manure from several farms can be pooled at a single location. Currently they have 150 dairy farms under contract ranging from those with only 400-1000 cows to one that has more than 10,000. In all cases these are family farms, and they greatly appreciate the steady lease income since the prices they get for their milk can fluctuate a great deal. So far, the company has recycled more than 1.7 million tons of organic waste (food was and dairy cow manure) and produced enough digestate to fertilize more than sixty-one thousand acres of crop land.

So, what this business model achieves is recovery of energy from both manure and food waste, a reduction in materials going to landfill and incineration, cleaner air around a dairy, a stabilizing income for family dairy farms, a reduction in the need for fertilizer, and an increase in the proportion of renewable energy for society. Further expansion is now underway. This is just one of the ways that the US dairy industry is pursuing sustainability and overall carbon footprint reduction.